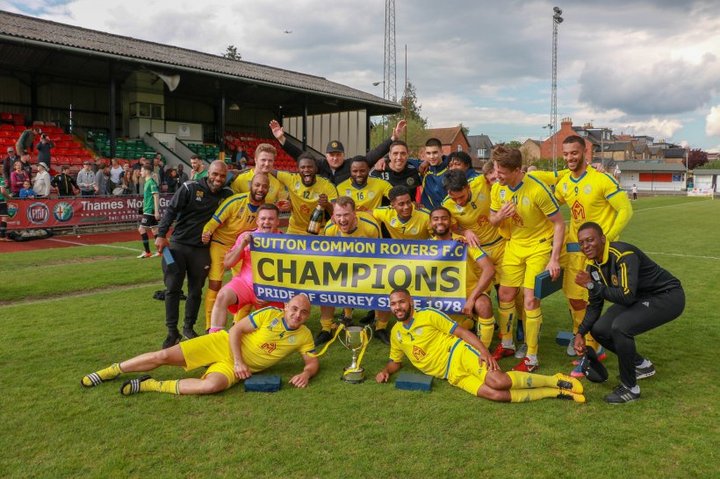 Just as with the Esoteric Recordings Division One Final, the Final of the Cherry Red Records Premier Challenge also produced only the one goal.

It was not scored until the 86th minutes when Sutton Common Rovers Matt Farrell had a comparatively easy opportunity to slot home after a good save from Kavanagh Keadall in the CB Hounslow goal but from which Farrell was the quickest to react and took full advantage.

SCR’s Gary Brigden has placed a summary of the game on the club website, which sums matters up and is reproduced here*, as is his excellent photo of SCR celebrating the win.
Thanks as always go to Windsor FC for their excellent hosting of the Final and their excellent playing surface and also to Jim Taylor, Past President Middlesex County FA.

*A game of few clear cut saw us have the better of the first half, although a low strike by Asa Rixon-Nicholls, which bought an excellent stop from the CB keeper Kavanagh Keadell, was our only real effort.

The second half again was a tight affair with limited chances. The evergreen Gavin Bamford saw a shot blocked by Asa Rixon-Nicholls as CB pushed forward, but with five minutes to go we scored the only goal of the game.

Guy Baskerville released Phil Page on the left, Page's low strike bought a good stop out of the keeper, but Farrell was on hand to fire home the loose ball, and secure the trophy.