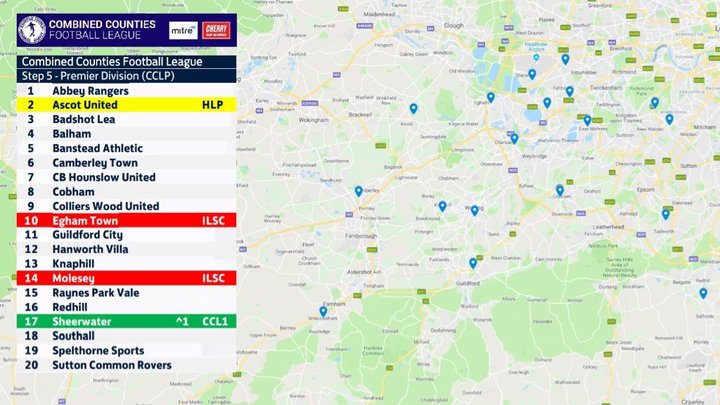 Following their 1-0 home win against Banstead Athletic, Ascot United have taken over as league leaders from Spelthorne Sports, who went down at home 3-0 to Southall. The All are now up to fourth, one of three clubs on 36, three points behind Spelly and a further two from the Yellamen.

Both the other clubs on 36 had good away wins against top-10 sides. Knaphill, now in third place, had an impressive 4-0 win at Sutton Common Rovers, all the goals coming in the first half with Perry Coles and George Spiers each bagging a brace. Frimley Green moved up to fifth, prevailing by the odd goal in five at Colliers Wood United. All the Green’s goals came before the interval, while the Wood ended strongly with two in the last ten minutes but couldn’t quite find an equaliser.

Mid-table Abbey Rangers shared six goals with Hanworth Villa. In the lower half of the table, Badshot Lea had their second 4-1 home win in succession, overcoming Sheerwater, who drop into the bottom three, while Guildford City and Redhill eahad 1-0 victories at Cobham and Camberley Town respectively.

It may be boring – presumably not for them - to say that Jersey Bulls continued their 100% run, but as ever, it’s true. This week they gained a 1-0 victory at Cove in front of a crowd of 146, thanks to a second-half goal by Fraser Barlow.

Just behind them – well, 26 points behind them – come in-form Bedfont & Feltham, who notched their sixth consecutive victory, 2-0 against Walton & Hersham at The Orchard. Despite finishing with ten men, Farnham Town remain in third place after a 2-1 victory in the promotion six-pointer at fourth place Tooting Bec. Sandhurst Town won by the same score at Godalming Town and climb to fifth, while Walton & Hersham go sixth with a 4-3 midweek win at Chessington & Hook United. Fleet Spurs are up to seventh after a comfortable victory - their second successive 5-0 - at Kennels Lane against FC Deportivo Galicia with Andre Smith scoring two.

AFC Hayes and Bagshot had an eventful draw at Farm Park with six goals and a dozen bookings, ten of which were for Hayes players. Yasha Najafi scored two of the Brook’s goals. Another man with two goals was Matthew Pearse in Ash United’s 3-1 victory against Chessington at Shawfield Stadium.