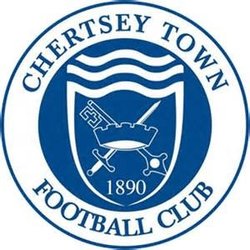 Organised football was evident in Chertsey well over a century ago but county affiliation did not take place immediately. The official founding of the club took place in 1890 when matches were played in the West Surrey League.

The first success came in 1897 when the Surrey Junior Cup was secured. A one year gap took place before football resumed in the same competition which eventually became the East and West Surrey League. A further halt in football took place during the Great War but soon after, in 1919, the club joined the Surrey Intermediate League where it stayed uneventfully, until 1939 and a further break. An invitation to become founder members of the Surrey Senior League was not taken up in 1923 but membership was later assumed, on attaining senior status in 1946.

The club has played at various locations within the parish (Willow Walk, Free Prae Road, Staines Lane and Chilsey Green Road) before settling down at the present home in 1929. The suffix ‘Town’ was added to its title some 21 years later.

The ground was donated by Sir Edward Stern as a football ground to the ‘premiere club in the parish’. Next door, a similar trust provides facilities for Chertsey Cricket Club. The main stand was constructed in the mid fifties; the original clubhouse added in 1960 and the first covered enclosure was built some three years later. Cover behind one goal was added in 1994.

Although Chertsey gained membership of the Surrey Senior League immediately after the Second World War, it was not until the 1959/60 season that success came with the league championship. This was repeated twice in the next three years, a halcyon period when the League Cup was also won on three occasions. Due to the static nature of amateur football in those days, the club could not progress to the preferred Corinthian League so, in 1963, it was controversially decided to turn professional and enter the Metropolitan League. Although an entertaining three years were then enjoyed, the cost was too much to bear and a return to lower levels of the Greater London League for one season occurred before a further shift to the Spartan League was made in 1967.

Indifferent results then dogged the club for almost two decades. This situation was briefly relieved in 1974/75 when the club were league and league cup runners up to an up and coming Farnborough Town.

Meanwhile, the fabric of the club was being built up behind the scenes and despite the lack of prominence on the park, movement was made via the London Spartan (1975/76) and Athenian leagues through to the Isthmian family with a place in Division Two South in 1984. Instant relegation to the Combined Counties League was suffered but, a rejuvenated side won promotion back to the Isthmian ranks within the year winning the League Cup on the way.

The club was rewarded with good league positions but further promotion denied at first. The worst season after returning to the Isthmians came when the two Division Twos were split in 1991 and a place in the new Division Three had to suffice. The position was quickly rectified with a runner’s up slot in 1992. The club also reached the quarter finals of the FA Vase, emulating a similar performance in 1987/88. One year later 102 points and a runner’s up promotion place to Division One was nailed. The League Cup was also secured together with the Carlsberg trophy in the same campaign along with the League Charity Shield.

Only one campaign was required in Division One before further promotion to the Premiere Division. The first season at that level was one of consolidation but the second was more difficult. A late rally was experienced, but was insufficient to avoid the drop to Division One. Two subsequent Division One campaigns were comfortable but the third proved too difficult after a very poor first half of the season.

Relatively respectable positions were attained for the next two seasons and then a return to Division One, taking a place in the revised south section in the Isthmian re-organisation. The side was not able to compete at this level and relegation to Division Two was suffered in 2003.

With the dissolution of the division, the club was allocated to Combined Counties in 2006. Promotionally hopeful situations were created regularly over the five terms in that competition. Finishing as runner’s up in 2011 was good enough on that occasion to secure promotion to Division One Central of the Southern League.

Unspectacular, but safe, performances were achieved for two seasons but the relegation was suffered at the end of last season, and with it a return to the Combined Counties League.

The team manager’s role was taken over in the 2014 close season by Kim Harris. The Chairman is Steve Powers. The club which also has a comprehensive and integrated juniors section of boys from all ages is sponsored by Traylen Enterprises; a nearby company that takes a great deal if interest in local community projects. The club now supports a ladies team who play in the Greater London League.

Chertsey Town’s nickname the “Curfews” is derived from a locally famous bell that hangs in nearby St. Peter’s Church. The bell has rung out the evening curfew, now ceremoniously of course, for over five hundred years.

The story of a local heroine – Blanche Herriot and the bell can be seen here: http://en.wikipedia.org/wiki/Blanche_Heriot