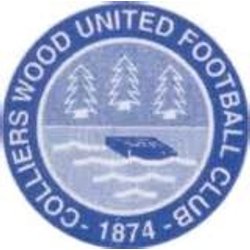 The club, one of the oldest in the country, and which has now been in existence for 141 years, received a well deserved recognition award from the FA for 125 years of playing football during 2011.

Collliers Wood United FC was founded way back in 1874 and the early years of their existence were spent in the Wimbledon and Sutton leagues before moving on to the Surrey Intermediate League (Southern Division). During the late sixties and early seventies, the club were members of the Surrey Senior League for a short time, playing in the newly formed division one where they won the league title in 1969/70. The reserves won their division in 1970/71 going undefeated.

The local recreation ground prevented the progress of the club due to the limited facilities and a search for a new ground was launched. Adequate facilities were found at Wibbandune Sports Ground in 1991 and the ground has steadily improved since then.

In 2002/3, the league amalgamated with the Combined Counties League and the club were founder members of the new division 1 where they finished as runners up and were promoted to the Premier Division.

They have continued to improve. In 2004/5, they finished 14th of the 24 clubs. The following season, they finished fourth and had a fine FA Vase run, beating Chichester City United, Raynes Park Vale and Greenwich Borough, before losing to VCD Athletic in the 2nd round proper.

In 2006/7 they entered the FA Cup for the first time, defeating Chipstead after a replay before succumbing to Worthing 0-3.
After a brief ground share at Croydon FC, the club moved back to Wibbandune where ground improvements included the addition of excellent flood-lighting, a new covered terrace and a 120 seat stand. In March 2012, the club added a new away team changing room, new spectator ground lavatories and relaid the entire playing surface including drainage thanks to a £71,000 grant from the Football Association. They also reached the 2011/12 final of the League Cup at Farnborough FC on 4th May v Guernsey FC in front of 667 spectators, which they lost 0-2 after extra time, becoming the first club to keep a 90 minute clean sheet against The Islanders. Following a second renovation of the pitch in April, the club returned to Wibbandune in July 2013 and the under 18 youth section was re-started.

In 2014/15, Wood reached the FA Vase 4th round (last 32 nationally) and the Surrey Senior Cup quarter finals for the first time in their history. They reached the final of the League Cup once again in 2014/15 but, once again, they lost in extra time, this time 1-2 to Camberley Town in front of 385 spectators at Woking FC.