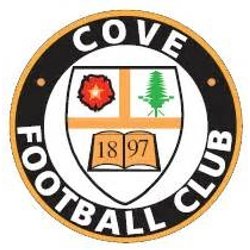 The club was formed in 1897, and starting playing in the Aldershot League.[2] The club then moved to the Surrey County Intermediate Leagues after World War two, where they were to become champions at the end of the 1949–50 campaign.[3] They then followed this success in the next three following seasons, with two more wins in the 1951–52 and 1952–53 competitions.[3]

The 1981–82 campaign saw the club join the Combined Counties Football League, starting in the West Division, which then merged with e Eastern Division to form a single division the following season.[6] The club remained in the division until the end of the 1989–1990 competition , where finishing third they left the league to play in the Isthmian League.[6]

In the 2000–01 season the club won the Combined Counties League and completed a double when they beat Walton Casuals, in the final of the Premier Challenge Cup.

Early into the 2012/13 season Cove parted ways with then manager D.Thomas, this paved the way for the rookie managers Dan Reeves 28 and Anthony Millerick 30 to take the helm as joint managers. This appointment started with the clubs first back to back clean sheets of the season, and infact 4 back to back wins with no goals conceded was seen. This progressed throughout 2012 with Cove entering the new year in 5th position. As 2013 kicked off Cove have further gone from strength to strength. With the 1st 2 months of 2013 remaining unbeaten, and currently occupying 3rd spot. It was announced in the Farnborough news and Mail on 21/02/2013 that Cove have now emerged as shock title contenders.