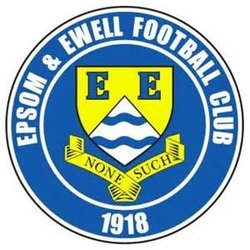 The club was formed in March 1918, as Epsom Juniors Cricket Club and played during the summer of that year. In the autumn of 1918 the club became Epsom Juniors Football Club and started playing their home games at Alexandra Recreation Ground. The new football club then joined the Surrey Junior League the following season, and then became founding members of the Sutton and District League a year later. The 1922–23 campaign saw the club change its name to Epsom Town Football Club. That season then proved very successful as the club won the Sutton and District League and moved to the Southern Suburban League.[2] More success followed as the club won the Southern Suburban League and joined the Surrey Senior League.

In their second season in the Surrey Senior League, the club went on to win the league, which they also successfully defended in the following campaign.[4] After their second league win the club moved to the premier Division of the London League for the 1927–28 campaign, where they won the league title at the first attempt. This season also saw the club make their debut in the FA Cup, where they reached the Third qualifying Round. In 1933–34, after beating Woking, Nunhead and Leytonstone, all clubs from the Isthmian League, Epsom Town reached the 1st Round Proper of the FA Cup for the only time in the Club's history, where they faced Clapton Orient from Division Three South of the Football League. The end of that season also saw the club change their name to Epsom F.C.

After the Second World War the club continued in the London league, until the 1949–50 season, when they joined the Corinthian league.After winning the Surrey Senior Shield in 1955 the club for the beginning of the 1955–56 campaign appointed their first ever manager, Doug Whitehead.

In 1960, Epsom Town changed their name to Epsom & Ewell in an attempt to increase their support across the borough. For the start of the 1963–64 season the Corinthian league merged with the Delphian League and the Athenian League keeping the latters name, which saw Epsom and Ewell placed in the newly created Division One. After finishing bottom of Division one twice in a row the club was relegated to Division two at the end of the 1964–65 campaign. The club remained in the Athenian league until the end of the 1972–73 campaign when they left and rejoined the Surrey Senior League.

The move to the Surrey Senior league saw the club finish as runners-up at the first attempt, followed by winning the league at the second attempt, under manager Pat O'Connell. The 1974–75 season also saw the club reach the final of the FA Vase, where they missed out on a double winning season, by losing to Hoddesdon Town 2–1 although they did retain the League Cup with a win over Virginia Water. The club then rejoined Division two of the Athenian league the season afterwards. The first season back in Division two saw the club finish runners-up and gain promotion to Division one. After one season in Division one the club moved to the Isthmian League when this league expanded to three divisions and joined the newly created Division two.

Their first season in the Isthmian League saw them become champions of Division Two and gain promotion to Division One.[13] The club stayed in Division Two until the end of the 1983–84 campaign, when they were promoted to the Premier Division as Runners-up, under manager Adrian Hill. However when manager Adrian Hill left the club after their first season in the Premier Division to join Croydon, the club faced successive relegations and ended up in Division two south. They stayed in Division two east until the start of the 1991–92 season, when the league re-organised and they were placed in Division Three.

In 1993, Epsom & Ewell sold their West Street Ground in Ewell, and became tenants of Banstead Athletic at the Merland Rise Ground, Tadworth.

In 2011, the club left Banstead Athletic's ground to go to Moatside, home of Merstham. At the end of the 2011–12 season, the club announced a two-year deal to share the ground of Chipstead.