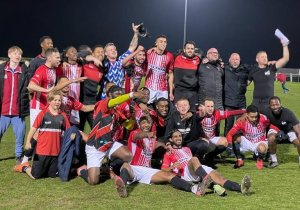 The League sends its congratulations to Hanworth Villa FC upon winning the championship of the inaugural Premier Division North, in fine style, winning every league match so far, bar three, which were draws. To win the championship in March, in a season where the overall standard has been very high, is a huge sign of the club's overall strength.

At the moment, if Villa win all its remaining league matches, they will outdo (by a point) the performance of AFC Wimbledon in 2003-04, who had four draws and no defeats, (although there were more league mathes that season)

Villa are now assured of promotion to Step 4. Picture is courtesy of Hanworth Villa FC