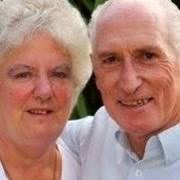 Details of all three finals

It’s been a struggle but we now have a date upon all remaining competitive fixtures for the remainder of this season.

In the Fripp-Smith Cup, our supplementary competition, we now know the finalists, namely Sandhurst Town and Spelthorne Sports, who will meet each other at the end of this week, SATURDAY 22 MAY, at Farnham Town FC, kick-off 3.00 p.m.
The competition is named after two CCL stalwarts who sadly died during the current season, namely Gordon Fripp(pictured with wife Barbara) and Ted Smith. Their names will be remembered within the CCL, not only for the work they did for the League but also for both being absolute gentlemen for whom no task was too difficult.

Barbara Fripp known to most of us as our previous Registration Secretary and much respected throughout the League will be the guest of honour.

On the following Saturday, 29th May, we have the Final of the Cherry Red Records Premier Challenge Cup. We owe a huge debt of gratitude to Cherry Red Records who must now be one of, if not the longest, League sponsors at non-league level.

The final will be played at Cobham FC, kick-off 3.00 p.m.
In this competition, sadly SCR have been eliminated due to an administrative error, leaving the reinstated Sheerwater to play against Abbey Rangers this week,on Tuesday 18 May, in the last remaining quarter final. Facing the winners next Saturday, 22 May, will be Redhill, already in the semi-final.

The other semi-final will see Ascot United playing at home on Tuesday evening, 18 May, against surprise package, Kensington & Ealing Borough. Congratulations are already due to Kensington who, on Saturday, reached the Final of the Middlesex Premier Cup, in which they will meet St. Panteleimon FC on Wednesday 26 May at the MCFA ground in Northolt.

Finally, on Bank Holiday Monday, 31 May, we have our Esoteric Recordings Division One Challenge Cup Final, which will see Merstham U23 playing either Chessington & Hook United or Godalming Town, who meet in the other semi-final on Tuesday evening, 18 May.

The Final will be at Ash United FC, when we shall also be presenting the inaugural award of the Ken Huckle Trophy. Ken was the League’s Referees’ Secretary for many years, and remained very active eventually assuming the position of President, a role in which he excelled.

His widow Judi will be on hand to make the presentation immediately after the match. The award will be made every year to a deserving match official on the League and the inaugural winner is Phil Paice, still one of our most respected officials with whistle or flag. Again, kick-off is at 3.00 p.m.

Spectators are now allowed, and very welcome, in accordance with Government and FA guidelines, at all the finals. Admittance for adults at any of the finals is just £5 and we would ask everyone attending to stay safe and abide by any requests from our three host clubs on the day. We are grateful to all of them for agreeing to host the games.

Please note that no programmes are being issued this season for the finals but we shall hope to get back to normal for season 21-22.