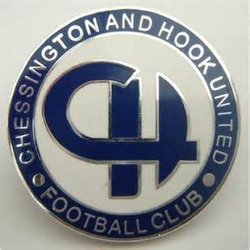 Chessington and Hook United Sports and Social Club have evolved from the original Chessington F.C., which was formed in 1921. A series of mergers over the years culminated with the coming together of Chessington United Football Club and Hook Youth/United in 1986.

This amalgamation brought together the Intermediate section of Chessington United based at Chalky Lane and the thriving Youth and junior sections of Hook Youth/United, which had been formed in 1986 and based at Lovelace Playing Fields.

The Clubs activities were to be centred on the facilities at Chalky Lane, which had been the home of Chessington United since the mid-sixties. They had taken out a lease on what was known as St Marys Recreation Ground, although at the time it was just an open space. Over the years the ground has been developed, almost entirely by voluntary effort, into the facility it is today.

Recently the Club has regained Senior status, with the Senior team playing in the F.A Cup and F.A.Vase. The strong Youth set up provides the opportunity for those aged between 5 and 18 to benefit from properly structured football.

In recent years the Club has been able to sponsor both Girls and Ladies football and has provided facilities for Archery and Ladies Netball.

The Club prides itself on the fact that it is maintained on a purely voluntary basis. All the Committee members, trainers, managers, ground staff and adult helpers give of their own time. Likewise the players receive no payment whatsoever from the Club. All players, from Youth to Seniors are required to pay a membership fee.

The aim of the Club over the years has always been to promote soccer through Youth with progression to Junior, Intermediate and Senior level as appropriate to the highest standard. Also, to foster and encourage other sporting activities for the local community consistent with the facilities available at the Club.

Since the establishment of Hook Youth in 1976 there has been a steady growth in the number of local youths who have become members of the Club. In the last few years there have been as many as 19 teams involving up to over 250 youngsters. The structure of the Club allows boys reaching the age of 18, or in some circumstances earlier, to have the opportunity to progress into the adult section of the Club.