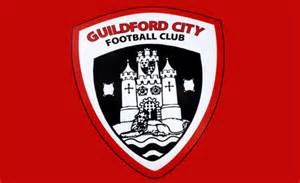 Following the recent appointment of Paul Barnes as first team manager, Guildford City Football Club has wasted no time in planning and restructuring ready for start of the new season.

Barnes has been appointed to add a new professional dimension to the club following a short but successful period with Staines Town FC. The new manager said ‘We will be working tirelessly to instil the need for professionalism right throughout the club. With quality players joining the squad, along with the appointment of such roles as sports scientist, physical and psychological coaches, performance analyst, sports therapist and all supported by a great coaching staff, it’s clear that the club has exciting plans for the future’.

In addition, the club continues to forge closer links with Guildford City Boys and Girls Football Club, and it is creating a women’s team for the first time. Plans are already in place to improve the Spectrum Stadium, with additional covered seating being the first priority.

Other initiatives include the launch of a new website on 1 June and a ‘Football for a Fiver’ scheme when the maximum admission charge next season will be limited to £5. Concessions will be £3 and children under 16 will be free – all designed to galvanise the local community and attract more support for the club.

The club has a great footballing heritage which many may not be aware of, and our aim is to make the town once again proud of its team. So much work has been carried out over the last four months by some excellent people, old and new to the club, and this will continue on and off the pitch to ensure a bright and successful future for Guildford City Football Club.

For further information please see the two-minute video at www.guildfordcityfc.co.uk .

From the Secretary  A Look at the Restructure