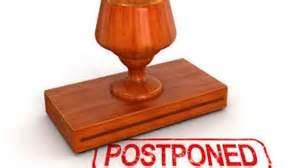 Most games OFF again

Yet again we have lost most of our matches today, including three of the four Vase matches involving CCL clubs. The only survivor is Brixham v Raynes Park Vale.

In the Premier Division North, Burnham v NGU is on (3G) and it looks as if Wokingham v Oxhey may survive.

In Prem South, Alton v Farnham is on (3G) and Jersey v Cobham goes ahead.

Everything else is OFF, again. Thursday evening matches look inevitable now along with some long midweek treks!