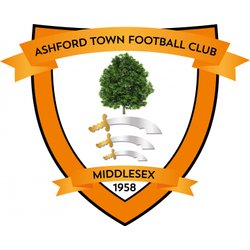 The club was formed in 1958 as Ashford Albion and first competed in the Hounslow & District League. Albion won two consecutive promotions to reach the Premier Division of the Hounslow League and were still competing at this level when the club changed its name to Ashford Town in 1964. It was at this time that the club adopted its distinctive Tangerine & White colours. The club endured a difficult first campaign as the Town club and withdrew from the Premier Division, assuming the Reserve Team's place in Division Two.

Having rebuilt the club with a very young team, Ashford Town rapidly advanced through the various divisions of that League, absorbing Staines Youth Club FC. on the way. Several individuals from that era have remained with the Club and now form the backbone of the Committee, including the Vice-Chairman and Secretary.

The Club were elected to the Surrey Intermediate League (Western) in 1967 and were promoted at the end of their first season. The Ash Trees were League Cup finalists in 1970-71 and League runners-up in 1972-73. In 1974-75, Ashford enjoyed their best season under the managership of ex-Fulham player Frank Reid, winning the League by three points from perennial contenders Merrow.

Although the championship eluded the Club in following seasons, it usually finished in the top four and prior to season 1982-83 an invitation was extended by Surrey County FA. to become founder members of the Surrey County Premier League. The invitation was readily accepted and Ashford played their first match in the new league on 4 September 1982, drawing 0-0 away to Farleigh Rovers.

Almost from its foundation, the Club had aspirations to acquire its own ground and after one or two disappointments, this was achieved in August 1985, when a long lease was signed with Spelthorne Borough Council, enabling the Club to move to its present home at Short Lane, Stanwell. From what was nothing more than a field, the facilities were quickly developed, with the first match at Short Lane taking place in February 1986, following two postponements for snow.

The Club now possesses a modern clubhouse and bar, kitchen facilities and boardroom. Floodlights were erected in September 1995, whilst the pitch is railed all round and partly walled, with standing covered accommodation, plus a purpose built 150-seater stand, built in 1998 (pictured). An additional 100 seats were installed on the opposite side of the ground to this stand in 2006, after the club won promotion to the Isthmian League Premier Division.

For both geographical and historical reasons, Ashford affiliate to both Middlesex and Surrey F.As and in 1989-90, their last season as an Intermediate Club, they reached the final of both Counties Premier Cup competitions, beating Farnham Town in the Surrey version but losing to Willesden Hawkeye in the Middlesex final. Runners-up spot in the League was also secured and with it the opportunity to enter senior football, as members of the Combined Counties League, senior status having been granted in May 1990. It was at this point that the club changed its name to Ashford Town (Middlesex) FC, to avoid confusion with the Kent club of the same name.

During its ten year membership of the Combined Counties League, the Club never finished below sixth place, and after finishing 3rd and 2nd in seasons 1992-93 and 93-94, it went on to win the League Championship for four successive seasons. It was a relative disappointment to only come 4th in 1998-99, even though the Club won the League Cup but a 5th championship in just six seasons was secured in 99-00, along with the Middlesex Charity Cup, the first ever senior county cup honour. With the ground up to the required standard, Ashford took their place in the Isthmian League for season 2000-2001 and by finishing in 3rd place, secured promotion to Division 2 at the first attempt.

The first season in Division Two did not the Club making sufficient progress and after a series of indifferent results, long serving manager Dave Kent left the Club on 28 March. His replacement was Nathan Wharf, an ex long serving player, who stepped up from Reserve Team management.

Further major improvements were made to the ground to enable the Club to be granted a B-grade and to take its place in the newly regionalised Division One of the Ryman League. A poor start saw the Club in the bottom echelons of the table but a number of new signings saw a significant improvement and a 17th place finish, which was an excellent performance after winning just one of the opening 16 league matches.
Further progress was made in 2003-04 as the Club finished 12th in Div 1 South. In the close season prior to 2004-05, the pitch has been completely re-laid to include both irrigation and drainage systems, at a cost of around £50,000, mostly financed by the Football Stadia Improvement Fund. Further medium term plans include new changing accommodation adjacent to the pitch, which will allow enlargement of the present clubhouse, and a hard surface floodlit training area.
The Club embarked upon new adventures in season 2004-05 in the Southern League for the first time, having been transferred over as a result of the FA Re-structure. The 4th Qualifying Round of the FA Cup was reached for the first time and Mark Butler, renowned goal scorer in his day with Aldershot Town, Staines Town etc, was promoted from Assistant Manager to Manager following the resignation of Nathan Wharf in December 2004. The play-offs were reached but resulted in a narrow defeat at Evesham United after extra time.

In 2005-06, Ashford went one better, finishing second in Division One West of the Southern League, to secure promotion to Step 3. This brought about a return to the Isthmian League for season 2006-07 and saw Ashford competing at their highest ever level. The season brought consolidation with the added bonus of reaching and winning the Westview (League) Cup Final when Ashford triumphed 4-1 over Dover Athletic at Bromley. The Reserves also lifted a trophy, securing the Middlesex Premier Cup.

Ashford built on this success, rallying from the foot of the table in November 2007 to narrowly miss a place in the promotion play-offs at the end of the 2007-08 season, a campaign which saw all of the club's senior sides challenge for honours. The senior side reached the Final of the Southern Combination Cup, the Reserves reached the Finals of both the Middlesex Premier and Surrey Premier Cups, while the Under 18s, led by club stalwart, Mick Snowden were champions of the Southern Youth League.

The 2008-09 season saw Ashford begin the campaign in electrifying form, winning their opening six matches to top the table. Mark Butler's side followed this up with a fantastic FA Cup run which saw them come agonisingly close to eliminating Forest Green Rovers in the Fourth Qualifying Round at Short Lane. Rovers won the replay and went on to run Derby County close in the Third Round. Ashford endured a difficult winter, which saw them flirt with relegation, before a late resurgence saw the side safely into mid-table. The cup competitions added much adventure to the season, as Ashford followed up their exploits in the FA Cup with runs to the semi-finals of both the Middlesex Senior and Isthmian League Cups and end their campaign by defeating Conference Premier outfit Woking 3-2 at Metropolitan Police to win the Surrey Senior Cup.

The 2009-10 season saw Ashford make a reasonable start to the campaign, but the Ash Trees were shocked when manager Mark Butler tendered his resignation on Friday 23rd October, in order to take up the Manager's role at Margate FC, who were struggling at the foot of the table. Ashford appointed former Leicester City and Bradford City midfielder Jamie Lawrence as his replacement, and the Jamaican international immediately led his new charges on a twelve-match unbeaten run. However, issues off the pitch were causing problems for the club and a number of players, including leading goalscorer Byron Harrison left for Carshalton Athletic, where Mark Butler had accepted a coaching role after leaving Margate, where he had been in charge for just three months. Ashford found scoring a problem after Harrison left and a dreadful run of form saw them go from the fringe of the play-off zone to battling relegation. Ashford went into their final match knowing a win would almost guarantee survival, while a draw would see them finish fourth from bottom - technically a relegation place, but certain to receive a reprieve owing to the demise of various other clubs. Sadly, a heavy defeat for Ashford, coupled with wins for Carshalton and Margate saw the latter two clubs survive - Margate receiving the reprieve for finishing fourth from bottom.

During the summer of 2010, the club were initially placed in the Central Division of the Southern League but were then offered the chance to remain at Step Three of the non-league pyramid. However, as this offer was as a direct replacement for defunct Southern League side Merthyr Tydfil, the decision was made that the vast increase in travelling would be too great a burden for the club and the club elected to remain in the Central Division. During this time, Bob Parker stepped down from his role as Chairman after twenty-eight years in the role. The club's home ground was renamed the Robert Parker Stadium in honour of Bob, who remains at the club as President.
The club entered a new era in the Central Division of the Southern League with Jamie Lawrence at the helm and with a mixture of established local players and new faces but the season was a challenging one. The club played some sparkling football at times and enjoyed an exciting run in the FA Trophy, reaching the last 32 in the competition before losing at home to Dartford. However, League form was patchy and the club finished 16th. One bright spark was the club winning the Southern Combination Cup, defeating Hanworth Villa 1-0 in the Final.

Jamie Lawrence resigned as Manager in June 2011 and the club immediately appointed his assistant, Paul Burgess, to take the helm after more than 21 years at the club, including 683 First Team appearances. Despite having little time to do it and few resources at his disposal, "Burgo" assembled a young and exciting team. Although any hopes of a tilt at the promotion play-offs were dashed by a dreadful run where the club failed to win at home for four months, Ashford finished the season strongly, winning two Cup Finals in 48 hours. In the Middlesex Charity Cup Final, the Ash Trees were 3-0 down to Northwood after 48 minutes before subsitute Kofi Lockhart-Adams scored four times to put his team ahead. The game finished 4-4, with Ashford winning the penalty shoot-out 4-2.

Two days later, Ashford defeated Badshot Lea 3-1 to add the Aldershot Senior Cup to the cabinet, aided by a fine performance from Paul McCarthy, who had saved two penalties in the first Final. A memorable season was capped by the club being named winners of the Southern League Fair Play Award.

After two respectable finishes in the Central Division of the Southern League, Ashford encountered a slump in season 2013-2014 and it was with a heavy heart that the Club parted company with Paul Burgess and appointed Ben Murray, a young coach with the club, who had enjoyed huge success at junior level. He was unable to stave off relegation but in the Club’s first season back in the Combined Counties League after 15 years, he built another young side that exceeded all expectations by finishing in 3rd place in season 2014-2015.