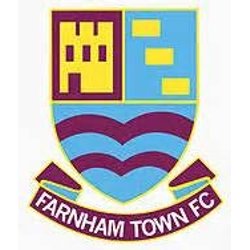 Farnham Town Football Club is a senior level football club based in Farnham, Surrey, England. Established in 1906 through the merging of Farnham Bungs (the Farnham Brewery) and the Farnham Star. The club was one of the founder members of the London Spartan League in 1975. They reached the Fourth Round of the FA Vase in the 1976-77 season.

At the end of the 1979/80 season Farnham Town left the London Spartan League and applied to the Combined Counties League, their application was accepted and they finished 4th in their first season. The 1986/87 season saw Farnham take second place to Ash United in the league campaign. The glory days finally arrived in the 1990/91 season when the club won the league title. In the 1991/92 season, the Town got a clean sweep of the major trophies by winning the Combined Counties Premier League, the Dan Air Elite Cup and the Dan Air Challenge Cup. Having won the league, the club applied and were accepted to the Diadora league, however funds for necessary ground improvements could not be generated which resulted in the club not having a league to play in for the 1992/93 season.

In 1993/94 Farnham Town were accepted back into the Combined Counties League where they continue to ply their trade. From 1995-1998 Farnham finished in the top six of the Premier Division for three consecutive seasons, in 1998-99 they finished in 13th position, then 10th in 1999-2000 before suffering relegation from the Premier Division in 2000-2001 season. They bounced straight back the following season but then endured four tough seasons back in the Premier Division, with bottom four finishes every season culminating in relegation back down to Division One in 2005-2006. Again the club bounced straight back and in 2006-2007 they won the Division One title under the guidance of Barry Bridger, but were denied promotion due to the Memorial Ground not meeting the desired grading by the league. The club then spent another four seasons in Combined Counties Division One.

Farnham gained promotion from Combined Counties Division One in the 2010-2011 season after finishing second behind Worcester Park. In Paul Tanner’s first season at the helm he gained automatic promotion back to the Premier Division at the first attempt, which after only retaining four members of the side from the previous years squad - who finished mid table, was quite an achievement. Paul Tanner’s side also won the Combined Counties Fair Play Award for 2010-2011 after going the whole season without having a man sent off, a record to be proud of. Also in their ranks, they had the leagues top scorer for the season in the prolific Mark Corbett who amassed a career best of 32 league goals in 34 league matches to propel Farnham to promotion after signing from Sandhurst in the Summer of 2010.

In a very successful year for the club on the whole, Dean Nelson’s reserve side finished second behind Mole Valley in the Combined Counties Reserve Division, improving on fourth position the previous season. Farnham ladies also finished second in their respective league to cap quite a remarkable season in Geoff Chapple’s final season as Chairman. The chairman of Farnham Town for 2011-2012 is Ray Bridger replacing Geoff Chapple, who previously managed Woking and Kingstonian and because of his continued involvement with Blue Square Bet South side Woking coupled with Farnham Town’s promotion back to the Combined Counties top-flight, Geoff is sadly ineligible to continue both roles.

Current first team manager and now in his third season at the club is Paul Tanner, alongside coaches Sean Birchnall & Peter Grinham with Dean Nelson and Andy Sharratt continuing to run the reserve side after winning the reserve title last year in a fantastic year.
Also the club continues to run an Under 18 Youth Team for the 2012-2013 season in the Southern Youth League after finishing second last year in their first season.

The club has developed hugely over the summer with the appointment of Youth Development Officer Kevin Holden which has seen new under 9, 11, 14 and 15 teams join the club which is a massive step forward for all involved.